S-MOVING, Smart, Autonomous and Unmanned Vehicles Forum, has inaugurated today its first forum in Malaga as a pioneer meeting in Europe in the field of smart and autonomous mobility connected by land, sea and air. With over 300 participating companies and a hundred speakers, the event will offer, from a transversal and multisectoral perspective, the challenges and opportunities linked to this technological development and its social impact 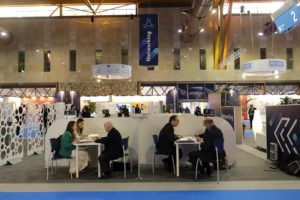 The Director of Employment, Business and Commerce of the Andalusian Government, Javier Carnero; the Deputy Mayor for Innovation and New Technologies of the City Council of Malaga and the mayor responsible for FYCMA (Malaga Trade Fair and Congress Center), Mario Cortés; the director of the Spanish Security Agency (Agencia Española de Seguridad Aérea – AESA), Isabel Maestre, and the CEO of Aertec and chairman of the Organization Committee of the event, Antonio Gómez-Guillamón, have opened today the first S-MOVING, Smart, Autonomous and Unmanned Vehicles Forum, which will last until tomorrow at FYCMA (Malaga Trade Fair and Congress Center).

Carnero highlighted the strategic nature of S-MOVING and mentioned that it is a “very powerful initiative aligned with the challenges and opportunities” of the Andalusian production sector, as well as “with the objectives of the Andalusian Government, especially those that are marked in the Andalusian Innovation Strategy 2020 (RIS3) and with the Industrial Strategy of Andalusia 2020”. Hence, the director of Employment, Business and Commerce has ruled that the meeting held in Malaga is, above all,” a very relevant opportunity for our region”.

Cortés, meanwhile, has highlighted the suitability of holding an event of this kind in a city like Malaga, that is considered a technological and innovative hub of relevance in Southern Europe. “We are facing a wave of disruption, now is the time for autonomous mobility to prevail and begin to be a reality in all media enabled instruments,” he said in relation to the novelty of the program, which brings together more than a hundred experts. Likewise, he recalled that S-MOVING joins an extensive list of expert meetings held in the city that “give prominence to Malaga but above all prominence to the Andalusian industry”.

Gómez-Guillamón, as chairman of the Organization Committee, explained that the meeting will address “cross-sectional themes of industry 4.0 and the social impact of new smart mobility media.” In addition, he stressed that “it pays special attention to the world of entrepreneurship” and start-ups so that “this forum becomes an open innovation platform for the future”. Gómez-Guillamón has indicated that “we are facing a new smart revolution”, where different actors come into play such as “disruptive mobility, Hyperloop, self-driving cars or completely electric vehicles”. “Malaga is going to play a very important role in this industry as a meeting place for those who want to participate in this revolution”, he concluded.

Furthermore, Maestre said that S-MOVING is “a pioneering forum in mobility of the 21st century” that will allow people to explore “the technological development applied to smart, autonomous and connected mobility” and its associated industry. AESA director emphasized that “this forum will serve to share the main advances and some of the initiatives” of the entrepreneurial sector, allowing for the “sharing of experiences and interconnecting different mobility areas” that promote continuity lines in the future. Maestre highlighted that “according to the Ministry of Development, we are committed to technology and digital transformation” as fundamental pillars for the development of the sector, since “innovation is the lever for change in order to attain changes in the current model”.

In addition to being a meeting point for the exchange of knowledge and experience, S-MOVING is a commercial platform for professionals from more than 300 companies interested in generating business opportunities and collaboration. In this regard, emerging SMEs have shared space with multinational companies such as Airbus, Aertec, Accenture, Asea Brown Boveri (ABB), Airtificial, Samsung, Indra, Alstom, Premo, Ayesa, Fagor Electronics, Hispasat, Nokia, GMV, Ferrovial, Asti Mobile Robotics, MADES, Maerks, Arelance, Datlight, Kongsberg Maritime, among others. Companies and entities such as Fundación ONCE and Caixabank (Payment Innovation Hub) also participated in S-Moving. In addition, the forum includes an exhibition area where a number of public companies and entities will display their products and services linked to autonomous systems, connected vehicles and related and complementary technologies. Moreover, there is a space for bilateral meetings with potential technological partners managed through an online tool.

S-MOVING has been organised by FYCMA, the City Council of Malaga and the Agency for Innovation and Development of Andalusia (Agencia de Innovación y Desarrollo de Andalucía) – IDEA+Invest in Andalusia under the Ministry of Employment, Business and Commerce. The University of Malaga (UMA) has acted as a Golden Partner and Asea Brown Boveri (ABB) technology group, Technological Corporation of Andalusia (CTA) and Vodafone acted as Silver Partners. . It had the collaboration of the Business Association for the Development and Promotion of the Electric Vehicles (Asociación Empresarial para el Desarrollo e Impulso del Vehículo Elétrico – AEDIVE), the Spanish Association of Drones (Asociación Española de Drones y Afines – AEDRON), the employers’ representative of the digital technology sector in Spain AMETIC, Andalucía Aerospace -Clúster Empresarial Hélice-, the Cluster Marítimo Marino de Andalucía, Aerospace Systems Cluster-Andalusia Technology Park, the Spanish Federation of RPAS Associations (FEDAR), the Association of Young Entrepreneurs of Malaga (AJE) and the Knowledge, Research and University Council through EXTENDA – Andalusian Agency for Foreign Promotion (Agencia Andaluza de Promoción Exterior).