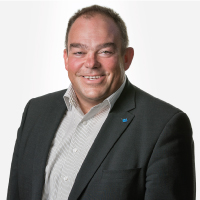 Dr. Bernd Liepert is the President of euRobotics aisbl, the international non-profit association for all stakeholders in European robotics.

As Chief Innovation Officer at KUKA AG, Dr. Liepert was responsible for expanding innovations at KUKA. In this position he can contribute his vast robotics experience at the interface between technological innovation and the market.
Since 1990 Dr. Liepert has worked in various positions for KUKA. He worked as Chief Innovation Officer at KUKA AG from 2015-2019, a worldwide leading manufacturer of industrial robots and provider of robot-based automation solutions From 2010 to January 2015 he was CTO of KUKA AG, responsible for technology and development of the whole KUKA Group. . From 2000 to 2009 Dr. Liepert was CEO of KUKA Roboter GmbH. From 1998 to 1999 he was a member of KUKA Roboter GmbH Board of Management, responsible for development and design. From 1990 to 1996 he worked as mathematician and developer at KUKA Schweissanlagen + Roboter GmbH before he took charge as head of research and development of the newly founded company KUKA Roboter GmbH until 1997.
Dr. Liepert earned his diploma in mathematics in 1990 at the University of Augsburg and his honorary doctor degree at University of Magdeburg in 2008.
From 2008 to 2012 Dr. Liepert was President of EUROP, the European Robotics Technology Platform, and since then he is President of euRobotics AISBL – the European Robotics Association. euRobotics was founded in September 2012 and has become the private side of SPARC, the European Public-Private Partnership in Robotics in 2013. As president of these associations Dr. Liepert has been leading the European robotics community and representing it at high political levels.