The second edition of S-MOVING, Smart, Autonomous and Unmanned Vehicles Forum, today completed its second edition positioned as one of the reference meetings for the generation and dissemination of knowledge linked to the new mobility paradigm. Multinational companies have coexisted for two days with start-ups and emerging companies, which have gained prominence in this meeting  with solutions and tools for intelligent, connected, sustainable and shared mobility. The use of drones to minimise human risk in certain operations and activities, the possibilities of microelectronics in aerospace research or the use of applications to promote sustainable travel options are just some examples. 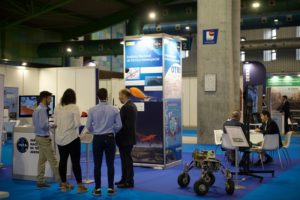 S-MOVING, the Smart, Autonomous and Unmanned Vehicles Forum, today concluded its 2019 edition after turning Malaga for two days into a meeting point for debate and knowledge exchange around intelligent, connected, sustainable and shared mobility. A thousand professionals have taken part in this highly specialised meeting which brought together around a hundred speakers from a dozen countries to address both the technological development around this concept and the impact that its application has on society. In this regard, the president of the Organising Committee and CEO of Aertec Solutions, Antonio Gómez-Guillamón, stressed that the simultaneous presence of more than 40 conferences and discussion tables has led to a series of “dialogues” that “have been an opportunity for all participants”. Thus, and in relation to the coexistence between the exhibition of products and services, the spaces for networking and forums, we are facing an “ideal meeting point for fostering professional relationships and exchanging knowledge”.

With this in mind, and as one of the main innovations, S-MOVING 2019 has emphasised the potential of innovative entrepreneurship in this area through the presentation of start-ups and emerging companies. Thus, the forum has had projects of a technological nature, in the case of Dronak and its work with drones in the industry to “minimise human risk, cut operating costs and facilitate the overhaul and maintenance of infrastructure”, in the words of its CEO Fabia Silva. Pangea Aerospace also works in the aerospace environment, whose co-founder and head of Propulsion Engineering, Federico Rossi, has assured that “everything is possible thanks to the miniaturisation of electronics”, in relation to the development of second generation “micro-launchers”.

Also, in S-MOVING 2019, emerging projects that address mobility from the user experience and their habits have also come together, such as Ciclogreen, a mobile application that “rewards citizens for moving in a sustainable way” – shared car, bicycle or public transport, inter alia – and whose platform is aimed at universities, companies and town halls with specific and customised programmes for each entity ”, as indicated by its CEO, Gregorio Magno.

In this regard, S-MOVING has positioned itself as an opportunity to identify potential collaborators and technology partners, with the estimated holding of some 600 work meetings that will foreseeably translate into business agreements in the coming weeks and months.

Likewise, the social impact of the new forms of mobility has been another of the big questions raised in the sessions, especially in its dimension as a service. Public and private sector experts have advocated today for offering the client a comprehensive service so that they can live a complete experience throughout their trip, which requires the integration of digital technologies, data management and operations automation

This final day has also involved the participation of representatives of leading companies in the mobility sector in terms of land, sea and aerospace, in the case of Dennis Liu, of the FORD Research and Innovation Center in California (United States); Alberto Coloma, director of the Renault Group Car-sharing programme; Silvia Lazcano, director of Technologies of Airbus Spain, and Karolina Korth, director of Strategy and Digitization of Siemens Mobility. It is the latter who have been part of the panel ‘Women and technology in intelligent mobility. Talent Woman by S-MOVING ‘, another of the great innovations of this year, organised by Talent Woman Spain to make women’s leadership visible in this field.

S-MOVING was organised by FYCMA (Trade Fair and Congress Centre of Malaga) together with the City of Malaga and the Agency for Innovation and Development of Andalusia IDEA, an agency attached to the Ministry of Economy, Knowledge, Business and University. The University of Malaga (UMA) is a Golden Partner. Aertec Solutions and the Technological Corporation of Andalusia (CTA) have participated as Silver Partners  Europcar Mobility Group, Fundación Once, Fundalogy, Renfe and Smart City Cluster have acted as Bronze Partners For its part, Connected Mobility Hub is an Innovation Partner. It has had the collaboration of the employers representing the digital technology industry sector in Spain, AMETIC; Andalusia Aerospace: aerospace systems clusters and the PTA Aeronautical Systems Cluster; the Confederation of Entrepreneurs of Andalusia (CEA); the Maritime Cluster  of Andalusia; the Official Association of Technical Telecommunications’ Engineers (COITT); the Official Association of Telecommunications’ Engineers of Western Andalusia and Ceuta (COITAOC); the Technology Park of Andalusia (PTA); Extenda-Andalusian Agency for Foreign Promotion, an entity under the Ministry of the Presidency, Public Administration and the Interior of the Autonomous Government of Andalusia; OnGranada Tech City and the Spanish Technological Industrial Safety Platform (PESI).